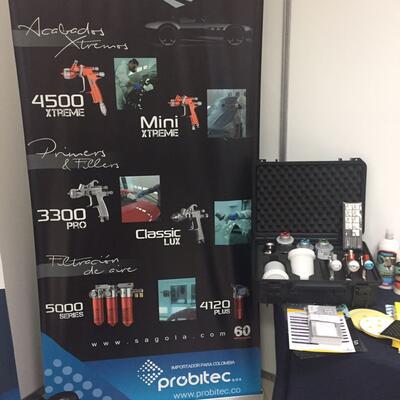 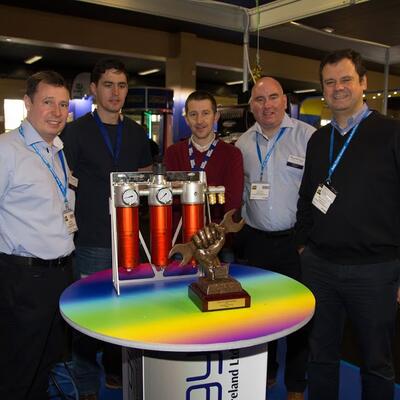 Sagola was present last October in the Auto Trade Expo in Dublin with Synergy; a great chance for us to be closer to refinishers to show them Sagola range of products and listen to their opinions and experiences. Thank you Synergy for your support. Sagola also took part in another event in Colombia with Probiterc; it was a two-days Bodyshop Seminar held by Cesvi Colombia where Sagola showed some of the most important products in Refinish catalogue.
END_OF_DOCUMENT_TOKEN_TO_BE_REPLACED 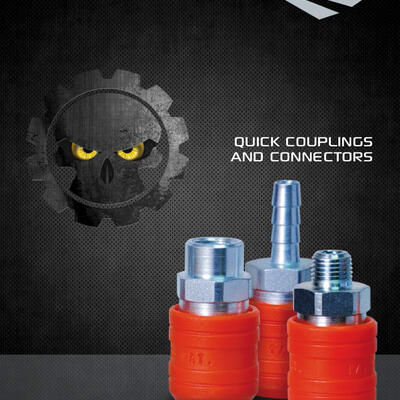 Sagola provides now a wider range of quick couplings and connectors including ultra-light and safety versions to meet all the market needs. They are all made of high quality materials to ensure long-lasting products with high performance and great wear resistance. Check our catalogue and ask for free samples.
END_OF_DOCUMENT_TOKEN_TO_BE_REPLACED 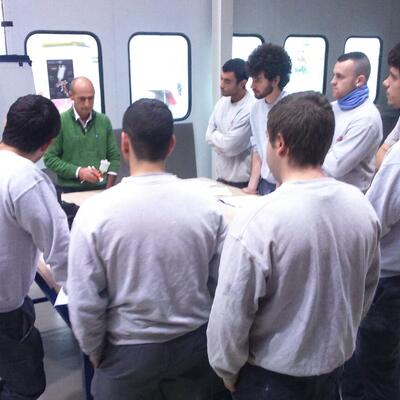 Sagola believes that the collaboration between industry and academic world is very important for the business evolution and that is why we often held training courses in schools and universities all over the world. A group of teachers of an Auto Body Repair Degree in Aretxabaleta (Gipuzkoa) took part in the training course, where our technicians talked about products and applications for the refinish sector. They had the chance to deeply know the most important product of Sagola Refinish catalogue such as 4500 Xtrem, Mini Xtreme, 3300 Pro and air filtration systems.
END_OF_DOCUMENT_TOKEN_TO_BE_REPLACED 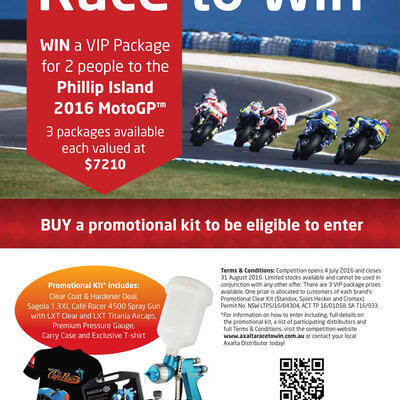 We couldn’t have dreamed of a better end for our Café Racer. The exclusive spray gun that Sagola launched on its 60th anniversary has successfully completed its life cycle taking part in the Axalta Australia " Race to Win" promotion.
END_OF_DOCUMENT_TOKEN_TO_BE_REPLACED 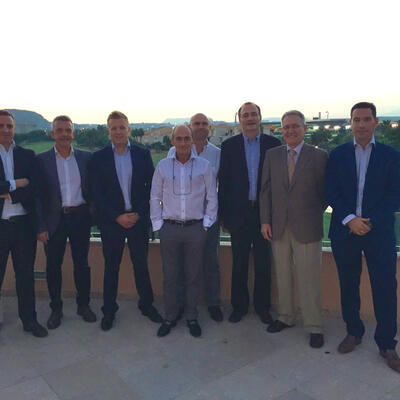 Last month, Sagola sales team for Spain and Portugal held a meeting in Alicante, where they set up the guidelines and strategies for the next year 2017. It is a yearly meeting, focus on market and new products information, where sales team members share information about the key sectors for the company. This quarter the Spanish market continues with the positive trends of the previous ones.
END_OF_DOCUMENT_TOKEN_TO_BE_REPLACED 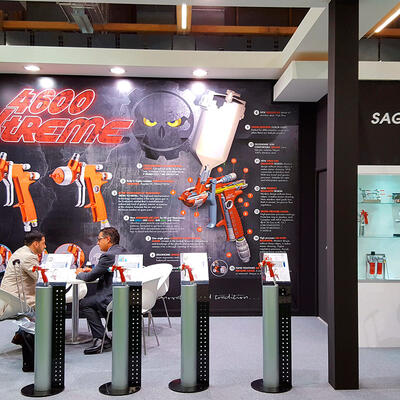 Sagola greatly appreciates his return as an exhibitor at Automechanika Frankfurt. It was a very intense week full of successful meetings with importers and distributors worldwide who had the chance to know firsthand our latest innovation for the refinish range: the new spray gun 4600 Xtreme. The technical characteristics and performance improvements of the 4600 Xtreme were highly appreciated by our visitors. Sagola showed as well the most representative products for bodywork sector such as the 4100 GTO spray gun, as excellent quality-price choice and the Mini Xtreme, the best solution for spot repair. Among the air filtration solutions offered by Sagola were chosen the 5300 and the 4000 filters to suit even the most demanding jobs. We also have a selection of products dedicated to industrial bodyshop including Double Membrane Pump or the 6110 Inox Pressure Pot with the versatile 4100 Xtreme pressure spray gun. For those painters who like the smallest details Sagola showed the Xtech line of airbrushes. Thank you very much to all customers who visited our stand and could see the wide range of products.
END_OF_DOCUMENT_TOKEN_TO_BE_REPLACED 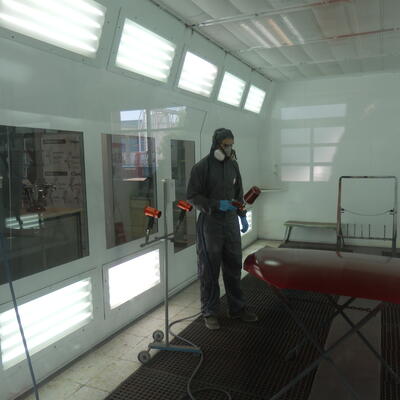 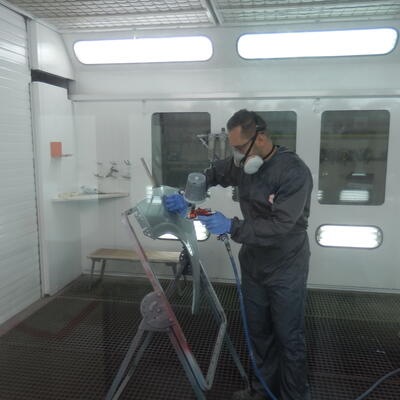 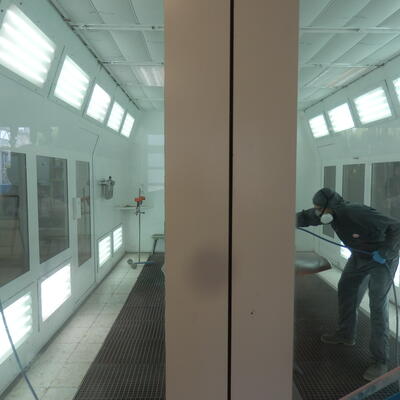 SAGOLA has sponsored Spanish and Portuguese finals of the 12th edition of the R-M Best Painter Contest. The competition for young painters under the age of 30 was held last 21 and 23 of June in the BASF’s Refinish Competence Center in Guadalajara. 66 Spanish refinishers took part in the previous test, however only 4 finalists Jorge Padrón, Pedro Jesús Sánchez, Jesús Chivite and Alberto Merino had the opportunity to show their skills in the national final of the 23th of June. Jorge Padron from Honda Armas Motor in Las Palmas de Gran Canaria won the Spanish contest. Fabio Esteves, Joäo Meleirinho y Joäo Pereira were the 3 young painters selected among the 45 participants from Portugal that demonstrated their skills in the Portuguese final of the 21th of June. The winner was Fabio Esteves from Oficina Auto Reparadora Meiavia in Marinha Grande. During the competition, the participants used Sagola high quality and performance equipments of the refinish range such as 4500 Xtreme spray gun, Mini Xtreme, Super Flow and the 5300 air filters and anti-static hose. Congratulations to Jorge and Fabio and all the Best for the International R-M Best Painter Contest that will be held in September from 26 to 30 in Clermont, France. Many thanks to R-M for giving Sagola the opportunity of taking part in the event and congratulations to R-M Spain for the excellent organization of the contest. View Galery Video 4500 Xtreme clear coat
END_OF_DOCUMENT_TOKEN_TO_BE_REPLACED 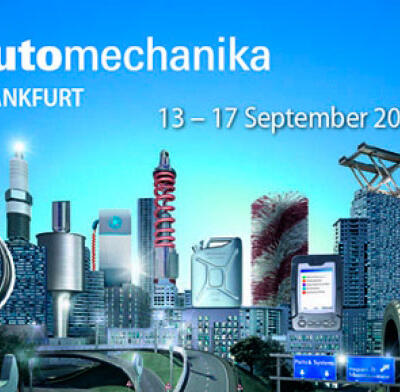 Stand D13 Hall 11.1 Sagola is one of the 130 Spanish companies that will exhibit in Frankfurt from 13 to 17 September. According to the data presented this month by Olaf Mussoff, director of Automechanika Frankfurt, the current edition keeps on with the increasing tendency of participation over the last year. The total area occupied by these 130 companies is 6.000 m2 that shows Spain as one of the top 10 exhibitor-countries. They took also the opportunity to explain some innovation regarding pavilion structure to welcome the increasing number of participants that last Automechanika were more than 4.600 exhibitors and 138.000 visitors.
END_OF_DOCUMENT_TOKEN_TO_BE_REPLACED 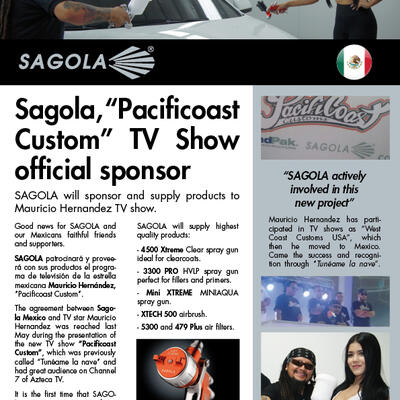 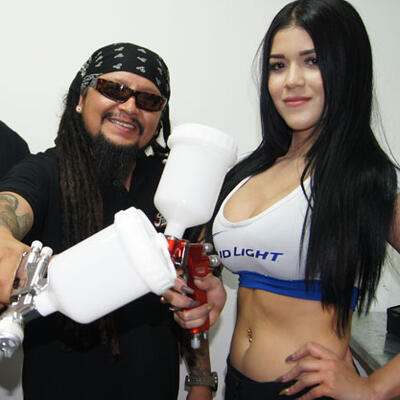 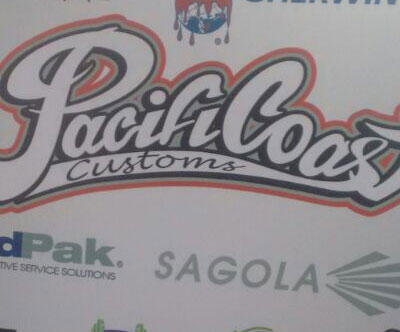 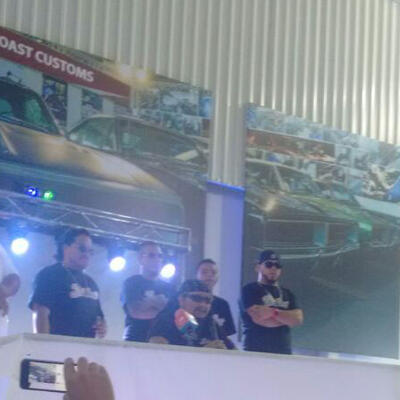 SAGOLA will sponsor and supply products to Mauricio Hernandez TV show. Good news for SAGOLA and our Mexicans faithful friends and supporters. The agreement between Sagola Mexico and TV star Mauricio Hernandez was reached last May during the presentation of the new TV show "Pacificoast Custom", which was previously called "Tunéame la nave" and had great audience on Channel 7 of Azteca TV. It is the first time that SAGOLA sponsors a tv car show, where Mauricio Hernandez gives the best thanks to his wide experience and great technical knowledge of the automotive world and refinish. SAGOLA will supply highest quality products: -4500 Xtreme LXT Clear spray gun ideal for clearcoats - 3300 PRO HVLP spray gun perfect for fillers and primers - Mini Xtreme MINIAQUA spray gun - XTECH 500 airbrush - 5300 and 479 Plus air filters
END_OF_DOCUMENT_TOKEN_TO_BE_REPLACED
Load more news...